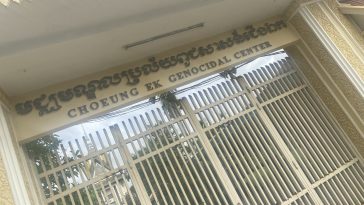 Choeung Ek Killing Fields is the site of an orchard that was used as an execution camp and mass grave during the regime of .

It is located around 17km from downtown Phnom Penh, and the notorious prison camp (which will have added context later).

How was Choeung Ek used?

The term the “Killing Fields” was popularized by the journalist . His story was to be the basis for the academy award winning film of the same name. In the film he was portrayed by the amateur actor and fellow survivor.

The “killing fields” were all different to some extents. Some were random places where masses of people were killed/mass graves, while others such as Choeung Ek were also extermination camps.

In the case of Choeung Ek the location was decided upon as it was (at the time) outside of Phnom Penh city, but also close enough to transport people from S-21. S-21 was the prison camp used to torture forced confessions from everyone from party members to children. The “confessions” usually stated that they were spying for ether Vietnam, the KGB, CIA, or all of the above. Of the 13,000 people that passed through S-21 there are only 7 known survivors. One  works at the memorial.

Most of these people were transported to Choeung Ek and either killed immediately, or would spend one night in horrific conditions before being executed. People were killed in all manner of brutal ways. Pickaxes, farming tools, etc. There was even a “special” tree where children would be beaten to death against. Overall there are an estimated 9000 bodies here, making it the biggest killing field in Cambodia.

sites related to the Khmer Rouge are done very differently to what they would be in other countries. This is for a number of reasons, but the main one is a lack of money. Choeung Ek, much like S-21 is eerily understated. Thereis a small museum and around 10 plaques showing what various parts of the camp were used for.

The centerpiece is a Buddhist memorial which holds the skulls of 50,000 victims. Many showing evidence of how the poor souls were killed.

One of the weirdest things about visiting Choeung Ek is just how much normal life goes on. There are people outside selling coconuts, a school next door, fighting roosters and even people still farming the orchard.

This combined with birds singing and a cool breeze make this one of the weirdest sites in the world. Weird though it may be, it is impossible not to be moved by a visit here and it is essential to understanding modern Cambodia and what the people went through under the.